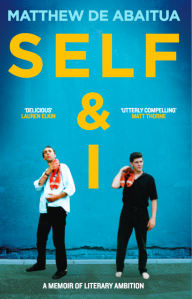 Self & I, by Matthew De Abaitua, is a cautionary yet always engaging tale, ideal for anyone who dreams of becoming a published author. Written in the form of a memoir it recalls true events and interactions from the author’s earlier years. It offers a reflection on a bygone era capturing how life was experienced without the maturity of hindsight. It remains mindful of those involved at the time.

In July 1994, twenty-two year old Matthew Humphreys was employed by Will Self as the newly divorced enfant terrible of the British literary scene’s amanuensis, translated as slave-at-hand. Matthew lived alongside the in-demand author in a remote cottage in Sussex. He was eager to learn from his new employer and develop his own writing. Matthew grew up in a Liverpool dormitory town, took a holiday job as a security guard on the city’s docks, attained an English Literature degree from the University of York, and studied creative writing at the University of East Anglia under the tutelage of Malcolm Bradbury. He was still waiting for his expected coming-of-age moment that would define what he would afterwards be.

1994 was before the internet and social media. Authors expected to be revered, to have readers accept whatever they were given. Writers sought validation from other writers, feeling anger and frustration when readers didn’t pay their work the attention they believed it deserved.

“A sympathetic protagonist, an easy and unassuming prose style, and a strong plot – these were marks of weakness. Signs of pandering to the reader. And who wants to hang out with that loser?”

Matthew was a naive young man full of big words and little understanding. Now a creative writing lecturer at the University of Essex he may well have written this book with his students in mind. It is very funny in places and offers an insight into the mindsets of both an aspiring and an established author. Will Self was well aware of how the world viewed him and worked on maintaining his reputation despite the personal costs. He offered the young Matthew practical help and advice whilst warning him against the excesses in which he himself regularly indulged.

“Play up the vivid persona and use it to smuggle the work into the culture. The side effect of such a public persona is that it becomes the object of other people’s frustrated ambition, and they take out their grievances upon the work.”

In the period covered Matthew is attempting to find his place in the world whilst learning to accept his own inadequacies. At times he struggles with the lonely life in the cottage and his relationships with the people he interacts with, including those from his home town.

“The people you leave behind, the life you reject. Old friends are signposts down an untaken path. Ambition requires betrayal.”

Matthew worked for Will Self for six months although they remained in contact for longer. As well as relating thoughts and incidents from this time he offers the reader pivotal periods from his background, and what came after. He recognises now that he didn’t yet have the lived experiences needed to strengthen his writing. He was impatient for the life he craved to begin.

“I was a young man who compared the books I read with the books in my head, and found them wanting.”

“You are not allowed to compare your imagined accomplishments to our actual ones.”

The ups and downs of living with a big personality like Will Self is fascinating but the insights in this book come from the author’s musings on his own thoughts and actions at the time. He has captured the intense certitude of a young person alongside that giddy concern encountered when they realise achievements beyond qualifications do not come with a map. In time Matthew will become a published author. That path is but one in a life chequered by mixed experiences and not coming to an end with the longed for publication.

As a reader with no illusions of ever acquiring the skills needed to write a book I am probably comparable to the nineties authors’ derided fans. I wonder if, in private, we are still thus perceived.

“Novels give us access to other lives, a few of which might be our own. Literary ambition belongs to readers as well as writers.”

An original memoir that is both absorbing and highly entertaining. Recommended to all with an interest in the world of creative writers, their yearnings, perturbations and conceits.

My copy of this book was provided gratis by the publisher, Eye Books.