Michael John Harrison had his first novel published in 1971 and has since produced more than twenty novels and short story collections, acquiring numerous awards and notable listings for his work. He is credited with being at the forefront of the New Wave science fiction movement. Although known for his SF and fantasy writing he now eschews labels believing the question of genre to be an irrelevance. He secures a space within which he can do what is necessary to get the point he wishes to make across, liberated to write what he needs to at the time. If not all readers get what he is saying he can accept this.

Prior to receiving his latest collection of short stories, You Should Come With Me Now (you may read my review of the book here), I had not come across M John Harrison’s writing. Thus I was pleased to discover he was visiting Bath and went along to Waterstones last Thursday to hear him speak. The event proved popular with the many in attendance who appeared familiar with the entirety of his published work.

Mike was in conversation with Steve Andrews, a Senior Bookseller at the store and an obvious fan. Having introduced his guest we were treated to readings of five of the shorter stories from Mike’s latest book. I was pleased that he included two of my personal favourites – Psychoarcheology and Jackdaw Bingo. He commented that many of the stories are linked to travel in some way, and he was therefore amused to be speaking from within the Travel section of the bookshop.

Following these readings there was plenty of time for questions – from Steve and the audience. Just as Mike’s writing cannot always be easily be categorised, so his answers were not necessarily what may have been expected. It was fascinating to hear him talk about the evolution of his attitude to writing and his creative style.

Mike was asked if he enjoyed playing the trickster. He explained that he sees writing and reading as a game, with points scored between writer and reader. He has fun with his writing, making use of tropes, employing parody and satire. In the past his intentions have not always been understood. Although his latest collection is subtitled Stories of Ghosts, the ghosts are such things as political spectres, past mistakes, ideas and situations.

Asked why he released a short story collection Mike explained that this came from writing his blog. There he takes a paragraph and then flips it, changing direction for the fun of it. He likes the results and also that he has produced stories of different lengths which fit well in a collection. As a writer, if there are no changes of direction he would consider himself stalled, even if still writing. He also has a novel in progress – it has fish people in it who may be trying to take over Britain and no one has noticed! Asked how he got involved with Comma Press he told us he had been looking for a small press as they are all the rage. He approached them and they agreed to publish this latest book. 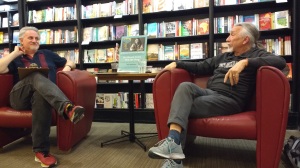 Does Mike like to drop his characters and therefore readers into unfamiliar landscapes? He has always written about where he is at the time. He grew up in a village on the cusp of being absorbed into a suburb – an Edgeland. He enjoys exploring the transitions between landscape – woods, derelict factories, urban nature writing. He prefers to write what he sees without specialist knowledge of, say, nature, getting across to the reader the experience of simply being there.

His book The Centauri Device was mentioned. Originally conceived as an anti-space opera it ended up revitalising the genre and influencing the works of later authors such as Iain M. Banks. It is Mike’s most in print work but he hates it – he was advised not to write it but did anyway. He much prefers Light, an award winning SF novel which references his personal interests – mountaineering and rock music.

Talking of the New Wave he believes this had more influence outside the genre than within. For a time it broke through the limits of SF&F but the wounds healed. He has no desire to try this again. He has gone on to write as he pleases, always he wishes to move forwards, not working on repeat.

Mike believes genre should react to the writer rather than writers trying to fit into an existing space. Results come through the work of individuals who have differing ideas. An audience member asked about the New Weird. Mike agreed that such umbrellas may be necessary for a given moment, as a shelter, but in the end Mike doesn’t wish to be labelled.

Asked if he read Philosophy Mike admitted to doing so when younger. He sees SF as weaponisation of philosophical metaphor, bruising to read. He has been influenced by dozens of movements outside of fantasy. He manipulates ideas, tips them towards reality and then destroys the image created.

There was discussion of how to world build without info dumping, finding a balance so that the reader understands but the story moves forward. Editors often encourage description but Mike prefers to strip back, to follow his instinct. Info dumps are fine if entertaining – as in Pschoarcheology which contains little dialogue.

Asked how much revising of text Mike did he answered that he is constantly throwing away what he has written and goes through many iterations before being satisfied he has expressed himself as he wishes. Asked what books he has read recently he mentioned Katherine Carlyle by Rupert Thomson. He would like to talk to this author about how he revises.

As the evening drew to a close Mike mentioned that the Christmas issue of New Scientist will contain a new version of Elf Lands – “a five-volume fantasy trilogy in 1000 words”.

There was then the opportunity to buy books and have them signed, with a long queue forming. The eager fans spoke of their excitement at the chance to meet this author, and he appeared happy to talk as he inscribed their purchases. 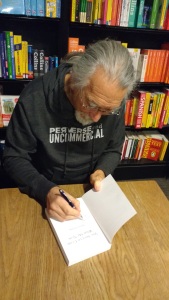 It was good to see so many younger men making up the audience at a book event. The demographic was notably different to most that I attend. Mike may have been writing for close to fifty years but it was clear from the way he spoke that he is more interested in enjoying what is to come than in what he has already achieved. 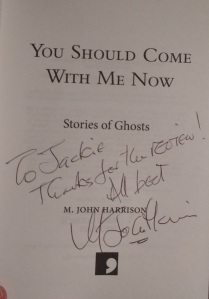 You Should Come With Me Now is published by Comma Press

“You think you see the real world. But you don’t.”

You Should Come With Me Now, by M. John Harrison, is a collection of forty-two short stories written by one of the pioneers of New Wave Fiction. It is his first published collection of short fiction for over fifteen years. The stories offer an unsettling view of a world that is at times surreal. In many ways they depict the negative, stripping back experiences and emotions to show how skewed accepted behaviour can be. The cast of characters vary in time and place but share a need to find a personal space where they can be a version of themselves each considers authentic. Some attempt to reinvent themselves and those they interact with to achieve this. The self-involvement of protagonists is dissected demonstrating how much is ignored if not fitting the narrative a person creates.

Slightly longer stories are interspersed with flash fiction. My favourite of these micro stories was Jackdaw Bingo which depicts a time when aliens arrive on earth and seek the dominant species to interact with and learn from. It is amusingly perceptive, as are many of these tales.

Another that deals with alien invasion is The Crisis in which London’s financial sector is taken over and the authorities, as ever, seek those willing to sacrifice themselves for what is claimed to be the common good.

“You can’t be the rulers if you have no country to rule.”

There are dreams, ghosts, psychodrama. There are manipulations and powerplay between individuals and those granted authority, the acceptance of such in exchange for what is regarded as a safe existence.

“The strangest thing, he says in a kind of gentle wonder, is to live in a time like this, both bland and rotten”

My view of the world is not as negative as is depicted but I can appreciate the sentiments to which the author gives rein. There is little explanation which adds to the potency of each vignette.

In Autotelia offers an alternative view of a future society where entrance to London requires strictly controlled medical checks. Told from the point of view of a doctor who has distanced herself from the disturbing nature of this work it ends with an outsiders view of the doctor. How challenging to be confronted with what others see.

Psychoarcheolgy is an amusing take on the discovery of the skeletal remains of the famous under construction sites.

“dig for the evidence, develop the interactive exhibit, crowdsource the story the public wants to hear. It’s the contemporary equivalent of the religious relics industry”

“Why have we suddenly started digging them up like this? […] All they mean to us is what we want them to mean.”

Dog People portrays the rise and fall of a sexual relationship alongside the complexities of family ties. In this interpretation hope is transient, resentments forever bubbling to the surface.

Although described as science fiction or fantasy, and many of the stories are not of our world, the leaps of imagination within each tale enable the author to parody real life politics, capitalism, and even his own domain, the literary elite. Many of the characters exude a quiet desperation, a distancing of themselves from other’s expectations.

A wide variety of subjects are covered with a few recurring themes. In a collection of this size there will be stories that resonate and others generating a less visceral response. I was amused, challenged and, at time, confused. Overall though my first foray into this award winning author’s work impressed.

Probably best dipped into rather than gorged in a sitting. A varied, intriguing read.

You Should Come With Me Now is published by Comma Press.